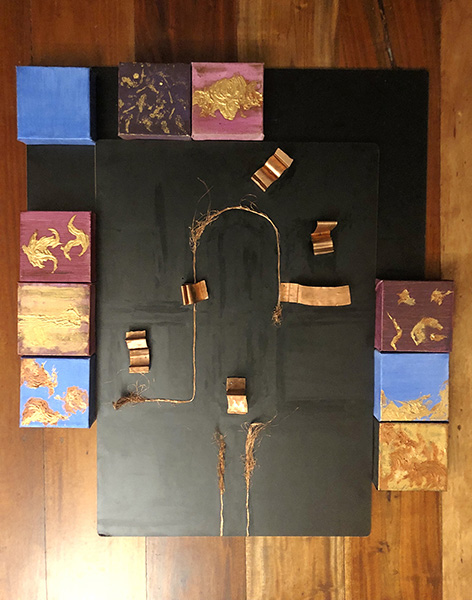 “there’s gold in the river and copper in our veins”

I find endless inspiration in reflecting on the ancient gold discovered in the Butuan River. The spirit of the river kept this treasure trove hidden safe for millennia, until Filipinos reclaimed sovereignty over the land. I try to envision the villagers who must have come together in panic-stricken anticipation of the invasion of the Spanish colonial army, knowing that it could mean the annihilation of their loved ones, the desecration of their sacred fields, and destruction of their way of life.

Whatever the reason, I doubt they foresaw the acts of genocide which ensued for the next hundreds of years: the systematic destruction of the cultural landscape and personal identity. Throwing their most treasured possession into the river was an act of hope.

It pains me to think what would have happened had they not come to such a united decision of collective sacrifice. If the Spanish army saw a glimmer of this gold, then we in this generation never would have. And we never would have known such an important part of ourselves as a colonised people — how our ancestors struggled against the invaders and resisted in every way they could, to preserve the land, to preserve the legacy that is our birthright.

450 years into the future: Another struggle unfolds, in a different place, against a different kind of invasion. One that struck a similar nerve — the un-doing of a way of life, of culture, of individual identity. The denial of a people’s will to self-determination. And again, a collective decision to resist an overpowering force called for action.

Something deep within each of us is awakened when rights are trodden, and acts of brutality threaten to disempower. I used fragments from copper tubing and wire to represent the buildings that came alive with student resistance during the Diliman Commune in 1971. Like gold, copper is ancient. Still essential to humans, it is used industrially for electricity, plumbing, air conditioning, and cooking, because of its ability to conduct energy for transformation processes. To my imagination, it was as if the copper enmeshed within the structures came alive and transformed a latent energy into a dynamic power to fight against injustice

Titat Ledesma is a member of the faculty of the Theory Department, currently pursuing an MFA at UP Diliman.

As a visual artist, I like to explore the possibilities of non-art materials, such as found natural/man-made objects or raw construction materials, to be the carriers of a message by their texture, tensile strength or other innate properties. I feel that some of these “speak” to me about very specific experiences on a multi-sensorial level, that involve the whole body in a visual moment. My artworks usually combine 2-d and 3-d elements, crossing between sculpture and installation, combined with painting. The content and forms in my works are usually driven by intuition over formal art conventions.